Fun Fact  Can be tracked by it's tears and will dissolve entirely into tears when frightened. 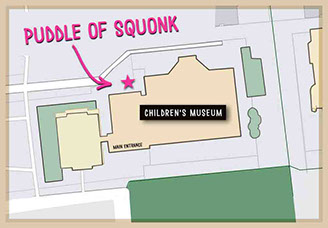 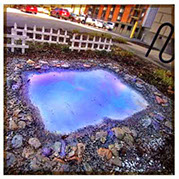 Puddle of Squonk can be found behind the main museum building by the bike racks.

You may push, walk on, and talk to the puddle of tears, but please be gentle.

Download Cryptid Adventure Map for larger view or to print

HOST     Imagine if you would. You walk into a dimly lit room, the quiet sound of muffled voices emanates all around you. You look left. You look right, but nobody here. Then BAM! Lights flash on. Tables flip over.  People jump out from hidden spaces,  screaming and shouting.

HOST     Oh my…  a surprise party? For the first time ever, the day of your birth was not forgotten, and is even being celebrated!

Imagine then a young child steps in front of you, wearing a t-shirt that reads, “4 for Sure!”, and the crowd of people lifts them up, screaming with joy as they walk past you, unnoticed, another birthday gone forgotten.

Imagine, how might you feel on such an occasion? Might you want to just run away and dissolve into a puddle of your own tears?

You may stop imagining now. Because here you stand, at just such a puddle, The Puddle of Squonk.

PROF CHILDREN     The squonk is quite the interesting fearsome critter.

PROF CHILDREN      A local of lumberjack lore - originating from the hemlock woods of northern Pennsylvania. It’s the saddest of all fearsome critters, very uncomfortable in the wrinkles of its own skin. Insecure and always crying tears of embarrassment. The poor thing. So socially awkward it will literally dissolve into an actual puddle of tears.

HOST     Museum visitor and recent four-year-old, Arlo Vasquez caught a glimpse of the retreating Squonk as she crowd-surfed her way to birthday cake.

ARLO      I saw its little butt. It was a cute little butt. Like a pug puppy butt. All droopy. All wrinkly.  You just wanted to hug that cute little pug butt. But, like, after eating cake... I’m four now. Do you wanna see my muscles?

HOST      Indeed those are the impressive muscles of a newly minted four-year-old. Scientific investigation of the Puddle of Squonk by Youth Prodigy Child Scientist Imani Smarts revealed very interesting data.

IMANI   The puddle is made up entirely of colorful waters and oils. The Squonk, like most terrestrial critters - including humans -, is made up of 70 to 76 percent water. The oil likely came from the Squonks droopy eye skin, which has seventeen times as many sebaceous and meibomian glands as human skin does. These glands produce oil that keep our tears from drying out. These squonks must have the most wettest and beautiful eyes in the universe.

HOST   We have placed a protective shield over the puddle of squonk to keep it from evaporating in the hopes that it will someday re-solve back into the physical squonk itself. Museum guests are encouraged to interact with the puddle, perhaps share a compliment or two, maybe just sit with it for a while, keeping our puddle of squonk company.

And until the day our squonk becomes whole again, we implore you to heed the words of recent four-year-old Arlo Vasquez.

HOST   You sure are young Arlo. Strong like the resilient tears of our beloved Puddle of Squonk.